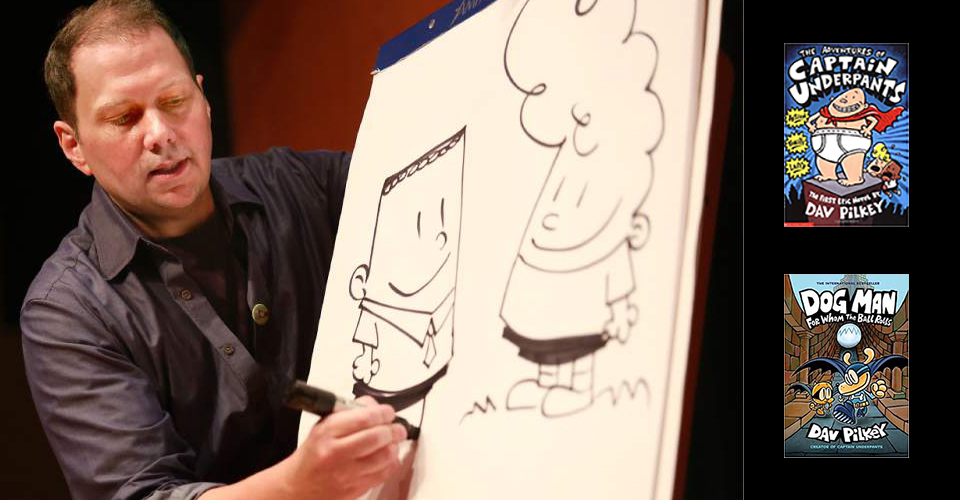 Children’s author, Dav Pilkey, creator of the highly popular Dog Man (a hound-supercop) and Captain Underpants (a superhero for grade-schoolers), gives a lot of credit for his success to having ADHD and dyslexia. It began when he was in the second grade  Because of his ADHD, he often had trouble in class, and his teacher would send him out of the classroom to spend time alone in the hallway. During these times, he began to conceive Captain Underpants.

“It ended up being kind of a blessing for me, too, because it gave me time to draw and to create stories and comics,” he told a reporter for the Washington Post. “In fact, my second-grade teacher gave me the idea for Captain Underpants. She mentioned underwear in class and everyone laughed and I was like: ‘Oh, that’s a good subject. I’ll do something with that.’ And so that was that.” He said that making comics was a way for him to stay connected to his classmates. He didn’t want his friends to think of him as a bad guy, o he drew Captain Underpants as a way to entertain his friends.

One of his greatest supporters was his mom, who took him to the library every week when he was having trouble in school and commissioned new comic books after his teachers ripped up ones he had already drawn. As he recalled, “I started to associate reading with love. And it changed everything.”

When he is touring, Pilkey says his young readers often tell him about their own difficulties and how his books have helped them. He said that this is one of the reasons he loves to tour so much. “Sometimes they’re proud in a way. There will be kids who will have posters they hold up that say that they’ve “got dyslexia like Dav,” or they’ll tell me proudly that they have ADHD. I don’t call it Attention Deficit Hyperactivity Disorder. I call it Attention Deficit Hyperactivity Delightfulness. I want kids to know that there’s nothing wrong with you. You just think differently, and that’s a good thing. It’s good to think differently. This world needs people who think differently; it’s your superpower.”

The theme of his most recent tour, is something Pilkey says  came from one of his books. “There’s a character named Petey, and then this little kitten comes along, and slowly the bad guy (Petey) is starting to change. It might sound corny, but the power of love is transforming him. I was really surprised that the kids are responding to that. This was kind of my story, as well, trying to be a better person now.”

His latest book, he says, explores the idea of doing good. “I’m turning that into a verb and an action word: If you see a kid eating lunch by himself at school, invite him over. That’s how we can all do good.”

Making any New "School-Year's" Resolutions?
Is it harder for people with ADHD to keep their New Year's resolutions?
4 ADHD Coaching FAQ Videos
"I’ve dealt with ADHD for years, but never really felt prepared for each day until I began coaching"