Learning Challenges are Over-represented in the Juvenile Justice System

According to the National Center on Education, Disability and Juvenile Justice, more than 125,000 youth are in custody in nearly 3,500 public and private juvenile correctional facilities in the United States. The majority of youth enter correctional facilities with a broad range of intense educational, mental health, medical, and social needs. Large numbers of incarcerated juveniles are marginally literate or illiterate and have experienced school failure and retention. These youth are also disproportionately male, poor, minority, and have significant learning and/or behavioral problems.

In the general population, approximately 10 percent of youth are identified as disabled and in need of special education by public school systems nationally. In contrast, 30 to 50 percent of incarcerated youth have disabilities. In other words, the prevalence of youth with disabilities is three to five times greater in juvenile corrections than in public school populations. This troubling phenomenon, occurs most frequently among incarcerated youth with emotional or behavioral disorders, attention deficit hyperactivity disorder, learning disabilities, and mild mental retardation. These learning challenges often occur together.

How Learning Services are Spread Across the Juvenile Justice System

Research has shown a strong correlation between lack of educational attainment and involvement in the juvenile justice system and the importance of education in preventing recidivism. For example, researchers have estimated that 35 percent of academically low-performing children became delinquent compared with only about 20 percent of academically high-performing children. A Criminal Justice Policy Council study reported that 37 percent of youth and young adults were less likely to return to prison if they learned to read during their incarceration. In acknowledgment of the  importance of education in the juvenile justice system, more than 2,600 residential juvenile justice facilities report providing education services. However, there are still gaps in the system. A report prepared by NDTAC (the National Evaluation and Technical Assistance Center for the Education of Youth Who are Neglected, Delinquent, or At Risk) surveyed the type of educational services provided by juvenile justice facility type. 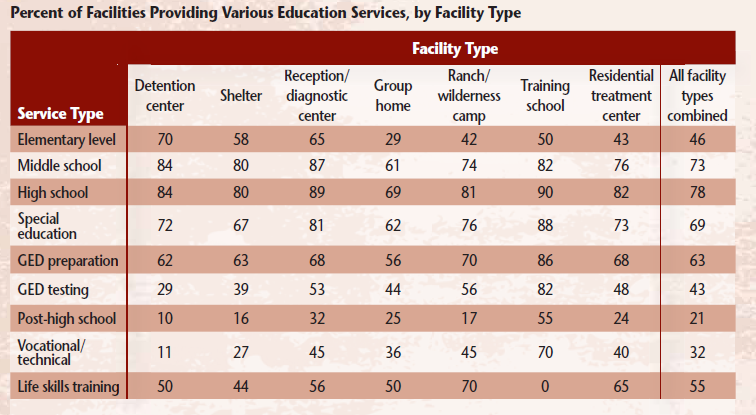 Student participation varies by facility type as well. The report summarized its findings:

The last finding highlights the problems that youth with learning challenges face in the juvenile justice system. These are society’s most at-risk kids and they need our help to succeed. Coaching is a proven method for helping these kids with the executive functioning skills and the coping strategies they must have to achieve academic success. We need to invest in their potential and avoid the high costs that come with ignoring them.

The Role of ADHD and Your Brain's Executive Functions
The 4 most common anxiety disorders associated with ADHD: Anxiety and ADHD – part 2
Video Games and ADHD - Entertaining Distraction or Potential Addiction?
After the ADHD Diagnosis