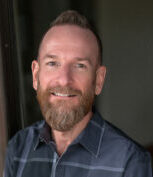 Bradley K. Ward, ACC, is a coach and consultant whose 20 years in the nonprofit sector influenced his decision to become a coach. He opened his practice, The Mission Coach, LLC, after relocating with his husband from Washington, DC to Palm Springs, CA in 2014. Brad specializes in emotional intelligence and leadership development coaching, and is thrilled to add Edge in-school coaching to his coaching practice.

Brad’s personal mission is to leave the world a better place than he found it, and fulfills that mission one student, client, and organization at a time. His underlying philosophy of coaching is that it should be available to anyone, which made Edge Coaching the perfect fit for him.

He completed his coach training at Fielding Graduate University in Santa Barbara, CA and earned his Associate Certified Coach credential through the International Coach Federation. Brad also holds a Bachelor of Arts in Music from Oklahoma Baptist University. He was chosen by the nonprofit sector because of his commitment to mission and vision, and served in the fields of public health, education, and arts during his 20 year tenure.