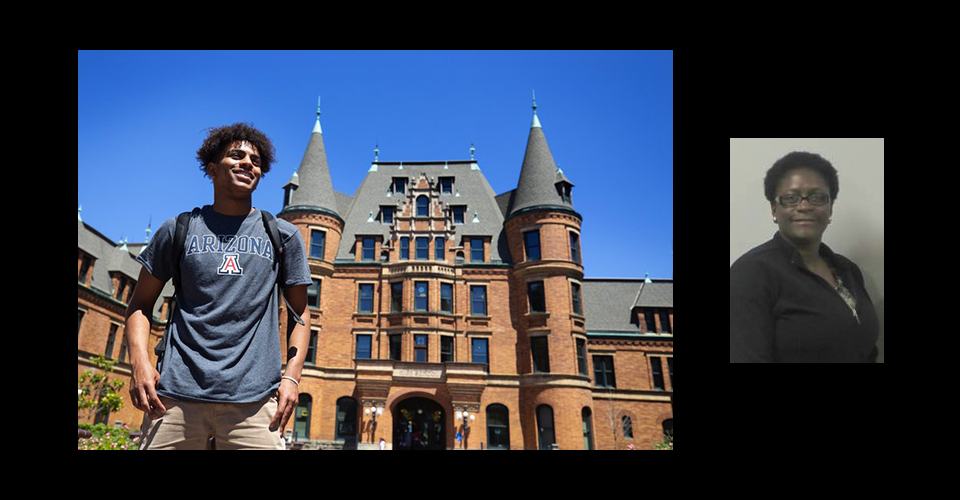 Last week the Seattle Times ran a front-page story on Vincenzo Di Salvo, a Tacoma School District student who received Edge coaching in middle school and triumphantly graduated high school. Next fall he will become the first in his family to attend college. Needless to say, we’re extremely proud of Vincenzo and his accomplishments. His Edge coach, Pamela Frazier (on the right in the image above), not only worked with him when he attended Jason Lee Middle School, but continued to stay in touch with him and mentor Vincenzo as he struggled through the first two years of high school, including the time he was homeless and had stopped attending school.

Vincenzo credits “Ms. Frazier,” his coach, as the single biggest reason he was able to turn his life around and graduate. Starting in seventh grade, Vincenzo met with his coach once a week. Working on decision-making, focus, and exploring options eventually led to Vincenzo gaining more emotional control. It took a long time, but he eventually starting building habits of success.  More than anything else, his coach told him he had options, and that he should “think bigger.”

While Vincenzo serves as an amazing example of the students who benefit from Edge coaching, he is not alone. Many students experience trauma/toxic stress in their homes. This could include anything from financial stress, fighting parents, moving from home-to-home frequently, feeling unsafe, abuse of any kind, and violence. All of these things fall under the category of Adverse Childhood Experiences (ACEs).

ACEs are common to nearly two-thirds of participants in a landmark study by the U.S. Centers for Disease Control and Prevention (CDC) and Kaiser Permanente. More than one in five in the study reported three or more ACEs. Recent neurobiological, epigenetic, and psychological studies have shown that traumatic experiences in childhood can have many long-term effects. They can:

When young brains experience this type of stress, it affects their development. According to the CDC and Kaiser-Permanente, these impacts can add up to poor academic performance, and later problems in life, including:

ACEs affect young people’s ability to focus, control impulses and to regulate emotions – all executive functioning skills. They greatly influence the chances of students succeeding in a highly scheduled environment like school. They make it much more likely that students will get in trouble, do things impulsively, and fail to complete their work. In short, these are the students who are much more likely to fall through the cracks.

One of the most effective ways to teach emotional regulation is with executive function coaching, which is what the Edge Foundation specializes in for students. Coaching is about emphasizing options and expanding personal control and choice for students. When students meet with a coach regularly, it is like exercising the “decision muscles” in their brain. They eventually learn to not react to life, and instead grow confident in their ability to choose for themselves.

One thing Vincenzo says again and again is that adults (especially his coach Pam Frazier) expanded his options by asking him powerful, thought-provoking questions. “I didn’t know college was a possibility for people like me,” he says. The same could be applied for professional and personal options. When students are asked these questions on a consistent basis, they grow in confidence and personal ability to direct their future.

We’re grateful that the Seattle Times chose to highlight Vincenzo’s story. And we’re proud to be in our eighth year working with teachers, counselors, administrators, staff and students in the Tacoma School District – in addition to the work we do with dozens of other schools throughout the country. We hope more schools will see how Edge coaching can benefit their students and urge them to call us at info@edgefoundation.org or 888.718.8886 for more information.

Tim Kniffin is Program Director for the Edge In-Schools Program. Tim has a special connection with young people. He served as a youth minister in Chicago, Lima (Peru), Sioux City (IA) and Vancouver (Canada) for more than ten years, in both urban and rural areas. Before becoming a Program Director, he served as Edge Foundation’s Program Manager for its Schools Coaching Program for three years. Tim and his wife Cynthia, who is a teacher, have two young children.

The Power of Edge Coaching
Edge Coaching Receives High Marks from Students
5 criteria to use to find an ADHD friendly college
Do You Know Your ACE Score?