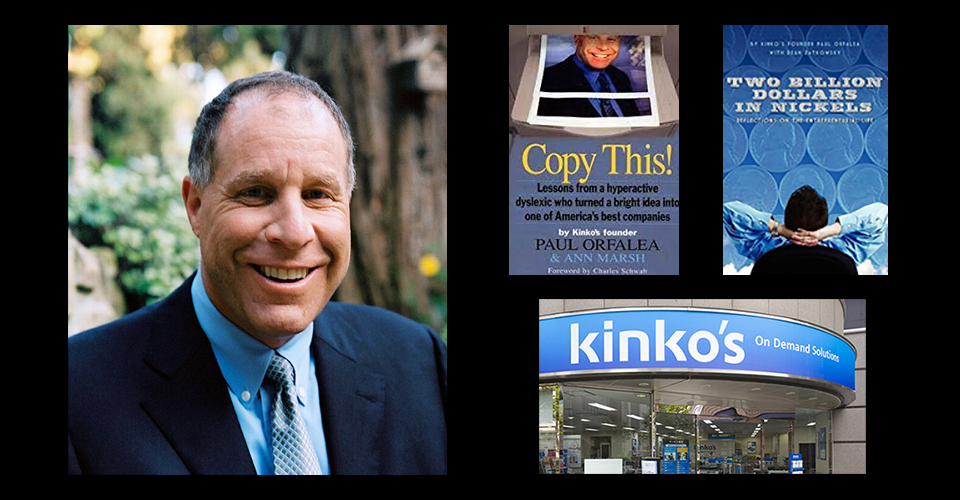 Paul Orfalea, the founder of Kinko’s (now part of FedEx), could easily have been a victim of ADHD, but managed to leverage it into a successful career as an entrepreneur. From an early age, he fit the profile of ADHD, but was never diagnosed. He struggled in grade school and had trouble learning the alphabet. He didn’t pay attention in class and flunked the second grade. He was labeled as a problem child and his academic future seemed doubtful, even though he was later tested and found to have an IQ of 130. He didn’t learn until years after that he also had dyslexia which made reading difficult.

He eventually made it through high school and went on to graduate from the University of Southern California.  He developed an early interest in business from both his parents, and in 1970 started Kinko’s in a small storefront in Santa Barbara.  His inquisitiveness and impulsive nature made him highly attuned to what he would later call “learning opportunities.” For example, he noticed that professors and students at the university had nowhere to make copies of class materials except at the library copier where they paid $0.10 per page. He believed he could provide a less expensive service and the idea of Kinko’s as a retail copy center was born. (The name came from his nickname “Kinko” which derived from his curly hair.)

Later, when he observed customers coming into his store looking to use a computer, Orfalea saw an opportunity to expand Kinko’s to include computers that could serve small business owners and the self-employed. Another idea he picked up from customers – staying open 24 hours. Over time these ideas and others helped grow the business to $2.4 billion before selling it to FedEx.

As he later reflected, “My learning disability gave me certain advantages, because I was able to live in the moment and capitalize on the opportunities I spotted. With ADHD, you’re curious. Your eyes believe what they see. Your ears believe what others say. I learned to trust my eyes.”

His innate restlessness also proved valuable in building the business. He didn’t like staying in the office and spent much of his time visiting different Kinko’s stores.There he picked up on what customers needed and discovered ideas for running the stores more efficiently. He cited not getting bogged down in the details of the business as one of the biggest advantages of his ADHD.

He has written several books including Copy This! and Two Billion Dollars in Nickels – reflecting on his ADHD and dyslexia, and the entrepreneurial life.

Paul Orfalea didn’t know initially that he had ADHD. But he learned to use the particular characteristics of his ADHD brain to develop a successful enterprise that has become an icon of American business life.